It’s no wonder our waistlines are expanding. New research from The George Institute for Global Health has revealed Australians are eating ever bigger portions of foods laden in fat, sugar, and salt.

Researchers compared data from 1995 to 2012 and found portion sizes for a large proportion of Australia’s most commonly consumed junk foods had risen significantly.

Pizza and cake stood out for being the worst offenders, recording a 66 per cent increase in the average number of kilojoules consumed in one sitting. A typical portion of sausage, cereal bar, processed meat, ice cream and wine also increased in size.

Dr Miaobing Zheng, of The George Institute for Global Health, said the results were worrying given that discretionary foods contribute about a third of Australia’s daily energy intake. “Over the past two decades we found that foods which provide very little nutritional benefit have surged in size, and this is helping to fuel Australia’s obesity epidemic.

“We had expected portion sizes to have grown but we were still surprised by just how much. It’s pretty disturbing that an average slice of cake has increased in size so much it now contains almost 1000 kilojoules more than it did two decades ago.“

Research Fellow Zheng added: “We aren’t 100 per cent sure why the portion sizes of these foods reduced, but if you take fries, for example, most fast food chains offer small portions, so it could be the case that people recognise these foods are unhealthy and consciously try and eat less of them.  But, unfortunately these foods items were the exception, not the norm.

“We know that people often under report the amount of food and drink they consume, especially if they consider them ‘bad‘ foods. So the true picture of what Australians are eating could be much worse.“

The team examined data from two different Australia-wide surveys – the 1995 National Nutrition Survey and the 2011-2012 National Nutrition Physical Activity Survey. Participants were asked to record everything they had eaten in a 24 hour period and were given photos and measuring guides to help them asses the size of their portions accurately.

Data was also recorded by age and sex.  Researchers found serves of ice-cream eaten by women had  increased in size by nearly a third.

Co-author Beth Meertens, of The Heart Foundation, said: “There has been some success in this area, but there’s lots of work to do. We need the community to understand how portion size may influence the amount of food they eat, and to think carefully about how they choose their food portions.

“But, more importantly, we need an environment which supports and encourages those choices. We need to work with the food industry to reduce the size of the products which have increased over time, and increase the portions of healthy foods.

“Now, with this Australian-specific information, we are better placed to improve portion size in Australia.“ 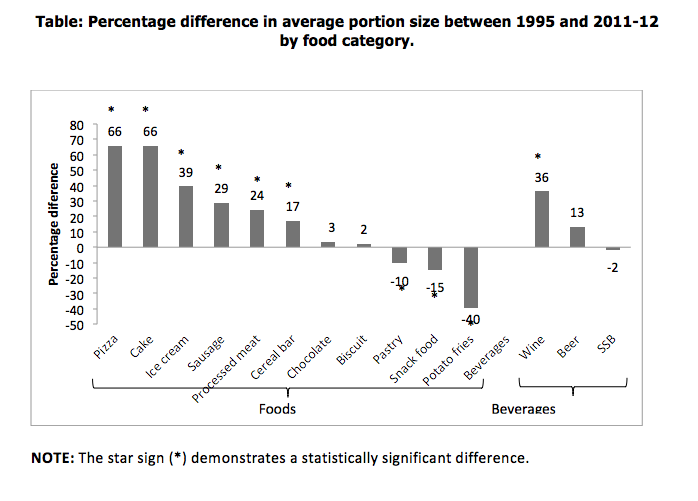