How your meat-free favourites could be tricking you

SYDNEY, SEPT 10, They might be plant-based, gluten-free, organic and vegan, but many meat-free alternative products are highly processed and packed with salt, making them more stealthy than healthy.

More than 2.5 million Australians are eating meat-free and the choice of alternatives such as meat-free bacon, burgers and sausages has almost tripled in supermarkets in less than a decade. But new research has revealed some popular products are hiding up to half a day’s worth of salt in one serve.

But it was a vegan pie that took out the saltiest product award, containing half of the daily recommended salt intake in just one serve. The recommended daily maximum for salt intake is less than a teaspoon, or 5 grams, but Australians are consuming nearly double that.[ii]

Heart Foundation dietitian Sian Armstrong said the report found high levels of salt in falafels, which is a concern because they are increasingly popular, with five times as many products available in supermarkets now as in 2010 – a growth of 380 per cent.

“Our research showed that there are large ranges in the amount of salt between meat alternative products, but it is possible to choose a healthier item by picking the lower salt option. It also clearly shows that manufacturers can produce products that are much lower in salt.”

The report analysed the salt content in more than 560 meat alternative products on supermarket shelves from 2010 to 2019.

“The growing number of Australians choosing to eat more plant-based foods is a positive move for health, but it is important that people focus on the quality and sources of plant foods, as some can be highly processed and lacking in nutrients,” Ms Jolly said.

“Meat alternatives such as tofu and falafel can be good protein sources as part of a healthy balanced diet, but with any processed or packaged foods, it’s critical not to rely on words or images that make a product appear healthier than it is. Check the label and pick the less salty option.”

The George Institute’s Senior Public Health Nutritionist and the report’s lead author, Clare Farrand, said reducing salt saves lives and that setting salt targets for the food industry works, but Australia is lagging behind other countries.

“It’s concerning that, in nearly a decade, there has been no change to the salt levels in any of the meat alternative products we looked at, and that new products coming on to the market are so high in salt, despite government commitments to reduce population salt intake,” Ms Farrand said.

“The UK has one of the lowest salt intakes of any developed country, and this has been achieved by setting voluntary salt targets and regular monitoring of the food industry to achieve those targets.

“Salt targets for the food industry in Australia are coming, which is great, but there are no salt targets for meat alternatives, and this will need to be addressed.”

VicHealth Acting CEO Dr Lyn Roberts AO shared some simple tips for shoppers wanting to enjoy meat-free meals without the side of salt.

“There are some fantastic plant-based foods that are low in salt, often less expensive and very healthy like plain tofu, legumes like lentils and black beans, and of course fresh vegetables,” Dr Roberts said.

“Try marinating your tofu in ginger, garlic and a bit of reduced-salt soy sauce for your stir-fry or fill your veggie burger with chargrilled mushrooms fresh off the BBQ.

“We want people to remember that meat alternatives like vegan sausages, pies and burgers can be highly-processed treat foods and certainly aren’t something we recommend eating regularly.”

About the Victorian Salt Reduction Partnership

The Victorian Salt Reduction Partnership was established in 2014 in response to alarmingly high levels of salt consumption by the Victorian public. The partnership comprises peak public health organisations: VicHealth, Heart Foundation, The George Institute for Global Health, Deakin University Institute for Physical Activity and Nutrition (IPAN), National Stroke Foundation, Kidney Health Australia, The Victorian Department for Health and Human Services, Baker Heart and Diabetes Institute, Food Innovation Australia Ltd, CSIRO and the High Blood Pressure Research Council. Australia is committed to meeting the World Health Organization’s target of a 30 per cent reduction in average population salt intake by 2025. To achieve this, the partnership has developed a comprehensive set of actions aimed at gaining consensus and commitment for salt reduction action from governments, public and industry in Victoria.

[i] The report uses data from the 2010 – 2017 FoodSwitch Monitoring Dataset. The FoodSwitch Monitoring dataset is generated from annual in-store surveys done at large grocery stores owned by Aldi, Coles, Independent Grocers of Australia (IGA) and Woolworths. FoodSwitch data collection protocol was used to collect products for 2019 from January – June 2019. Products named in the report, and in this release reflect those available for sale at that time.

[ii] Australia has committed to the World Health Organization’s (WHO) target of a 30% reduction in the average population salt intake by 2025. WHO and the Heart Foundation recommend adults consume less than a teaspoon of salt daily (5 g per day). Currently, Australians are consuming nearly double that amount (9.6 g per day). 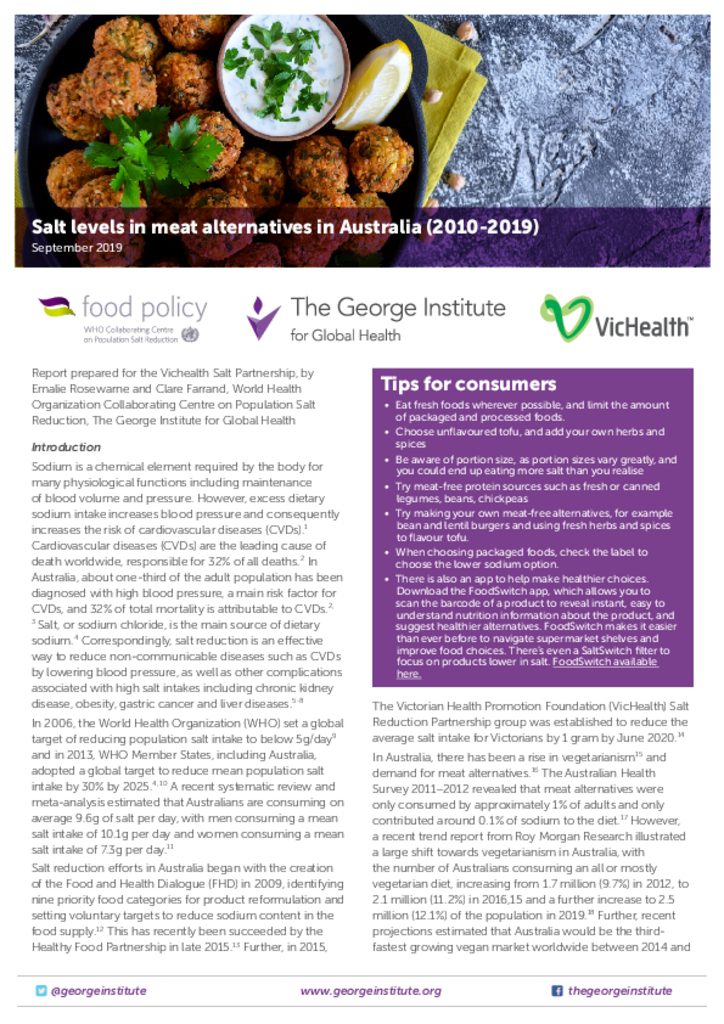