Around 150 million people are affected with mental disorders in India. Depression, Anxiety, stress and associated risk of suicide are some of the most common mental disorders. Earlier research has shown that India has high suicide rates with Andhra Pradesh having one of the highest suicide rates in the country at around 37.5/100,000 people.

The gaps in seeking adequate healthcare for common mental disorders, which included depression, stress and elevated suicide risk, is around 75-80% in resource-limited settings such as India, as compared to 40-50% in developed countries. There are multiple reasons for this treatment gap, some of which include stigma, lack of trained mental health professionals, limited awareness about mental health etc. These problems are more severe in rural areas.

Training mental health professionals in sufficient numbers in these settings are, simply not pragmatic. Hence, it is the need of the hour to develop innovative strategies to increase access to a basic standard of mental healthcare.

To provide feasible solutions to these problems The George Institute India conducted a large scale pilot study in the West Godavari region of Andhra Pradesh and found depression rates of around 12%, with more than 40% of those with moderate to severe depression and/ or anxiety having suicidal thoughts. The study also worked on the principles of a village-based anti-stigma intervention to:

The results of intervention from the pilot study were very positive and there was a significant reduction in the depression and anxiety scores between start and end of the intervention among those who had screened positive at the beginning. Stigma and mental health awareness in the broader community improved during the project. There was an increase in the service utilisation to almost 80% after the implementation of this project.

However there is a need for the effectiveness of the intervention to be demonstrated using more robust randomized controlled trials, while addressing the issues identified that will facilitate scale up. The Smart Mental Health-cluster randomised trial tries to answer these questions.

The study aims to evaluate the feasibility, clinical effectiveness and cost-effectiveness of a multifaceted primary healthcare worker intervention. The study hypothesizes that:

This study will be conducted across 44 PHCs identified in Andhra Pradesh and Haryana. The first 12 months will involve the formative phase where the Intervention components will be enhanced and also certain optimisation will be made specific to Haryana. Since this will be a Randomised control trial, the study would start with the identification of the high risk and non high risk cohorts by the ASHAs using the PHQ9 and GAD7 scale by screening adults in the village for CMDs. This will be followed by a detailed data collection on various other parameters by the Interviewers.

All individuals included in both the high and non-high risk cohorts will have a follow-up detailed assessment by trained interviewers where they will be asked questions about their socio-demographic and health characteristics, mental health awareness and stigma, social support, stressors, treatment history, past history by independent trained interviewers. Following baseline data collection, randomisation will be conducted at the level of the PHC and will be randomised to Intervention and Enhanced Usual care group.

This phase is followed by the Intervention phase. The core components of the intervention will be:

Follow up data collection at 3 month, 6 month and 12 month will be collected by the interviewers who will be blinded to allocation. Following the cRCT for 12 months, the intervention will be offered to the control arm too, and then both the control and intervention arm will continue to receive both the anti-stigma and mHealth components for another 12 months

The Study is funded by National Health and Medical Research Council, Australia as part of the Global Alliance of Chronic Diseases scheme

Ethics approval obtained from TGIEC, EC approval awaited from AIIMS, Delhi. HMSC approval awaited from ICMR. Selection of PHC and villages has been completed in both sites. Mapping is ongoing in Andhra Pradesh and will commence in Haryana from mid July. Other activities will follow as per the scheduleIdentification of PHCs and villages has been completed in AP and is ongoing in the Haryana site. Mobile application and designing of the database is in process. Study specific tools and Intervention components are being enhanced. 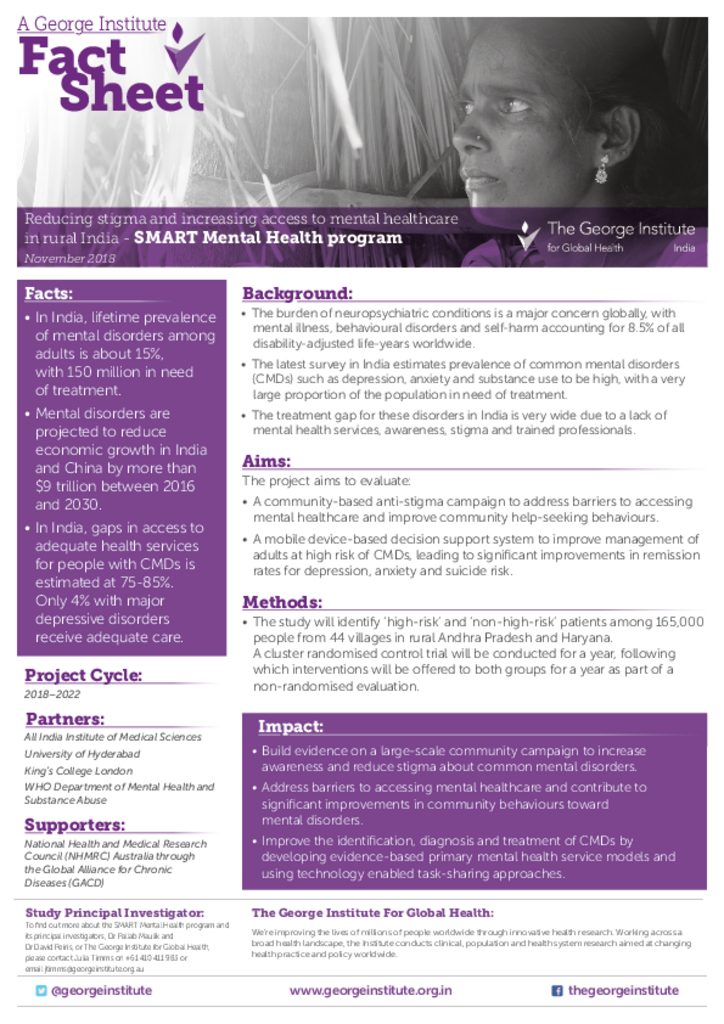