Insulin treatment is an effective therapy, sometimes the only way to control blood glucose. The progressive loss of ß-cell function in T2DM and the eventual failure of OADs even in combination leads to the need for insulin therapy in many patients.

The scientific use of basal insulin is of great help to individuals and the government for glycemic control. However, there are few studies to investigate the real world use, effect, safety and influence factors of basal insulin in China.

This study is to evaluate the use of first basal insulin in China patients with type 2 diabetes with inadequate glycemic control on oral antidiabetic agents (OADs) from the naturalistic clinical practice, which may contribute to develop related regulations and policies, and guide intelligent use of insulin.

The resistance and delayed or inadequate use of basal insulin (BI) have been proven to be among the reasons of the bad glycemic control. ORBIT study is therefore designed to evaluate the usage, outcome and safety of initial BI in real world of China, and explore the barriers which impact the use of BI in specific situations, which include but not limited into different region and hospital level.

ORBIT is a multicentre, observational, prospective, registry study in China. 200 hospitals from eight regions of China took part in this study, and about 20,000 patients with type 2 diabetes mellitus (T2DM) who are inadequately controlled with OADs and willing to accept BI treatment were consecutively enrolled during a 18 months period.

For each participant, interviews were conducted at baseline (zero month), three month and end point (six month) to collect study information including effectiveness and safety, practical use of BI regimens, diabetes management and quality of life.

This study has been completed. Further publications are in preparation. 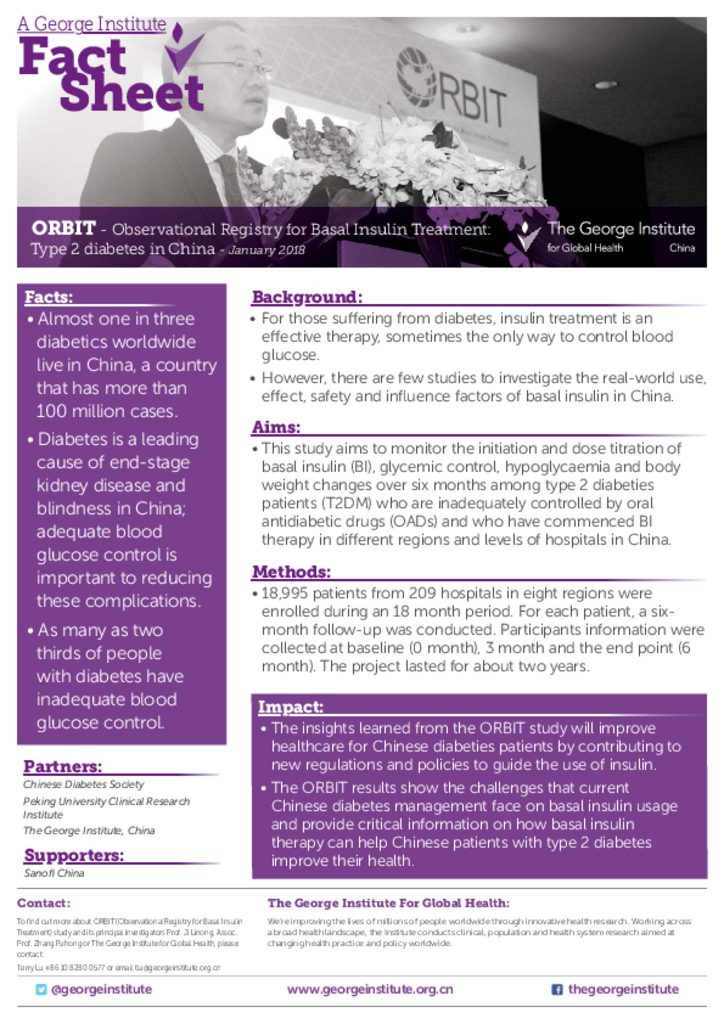