The adolescent population are the future of the country and in India they contribute to the demographic dividend of the nation. Adolescence is a vulnerable period with rapid changes in physical, mental and social levels. According to World Health Organisation, around 20% of children and adolescents suffer from a disabling mental illness, and suicide is the third leading cause of death among adolescents. It is estimated that majority of adolescent mental disorders worldwide are left untreated and unidentified. There could be a number of risk factors for mental disorders among adolescents living in slums such as violence, deprivation, social vulnerability, substance abuse/use etc.

There has been a rapid growth of urban population and more than 65 million inhabitants live in almost 14 million urban slum households in India. Slums have inadequate housing, unhealthy and poor living conditions, and inadequate systems to benefit from government schemes. In addition, members residing in such conditions have health problems worse than their non-slum counterparts. Though adolescents are an otherwise healthy group, deprived living conditions in slums may predispose them to both poor mental and physical health. Though there are studies that look into this relationship, there is however limited research that explores the inter-relationship of risk as well as resilience factors, especially among adolescents living in urban slums, and its overall influence on their mental health.

Project will employ a cross-sectional mixed methods design conducted in two urban slums of North (Faridabad) and South India (Hyderabad) Municipal Corporation with a population of about 10,000 each. A census of selected eligible population will be done followed by a screening of 2000 adolescents for CMDs (constituting ~20% of the total population) and assessed for risk and resilience factors. Qualitative interviews will then be conducted among adolescent girls and boys; and peers, parents, in-laws, school teachers, PHC doctors and primary health workers, local councillors/ corporators etc. An intervention will be piloted on a small scale among a different set of 100 adolescents by collecting routine programme data. 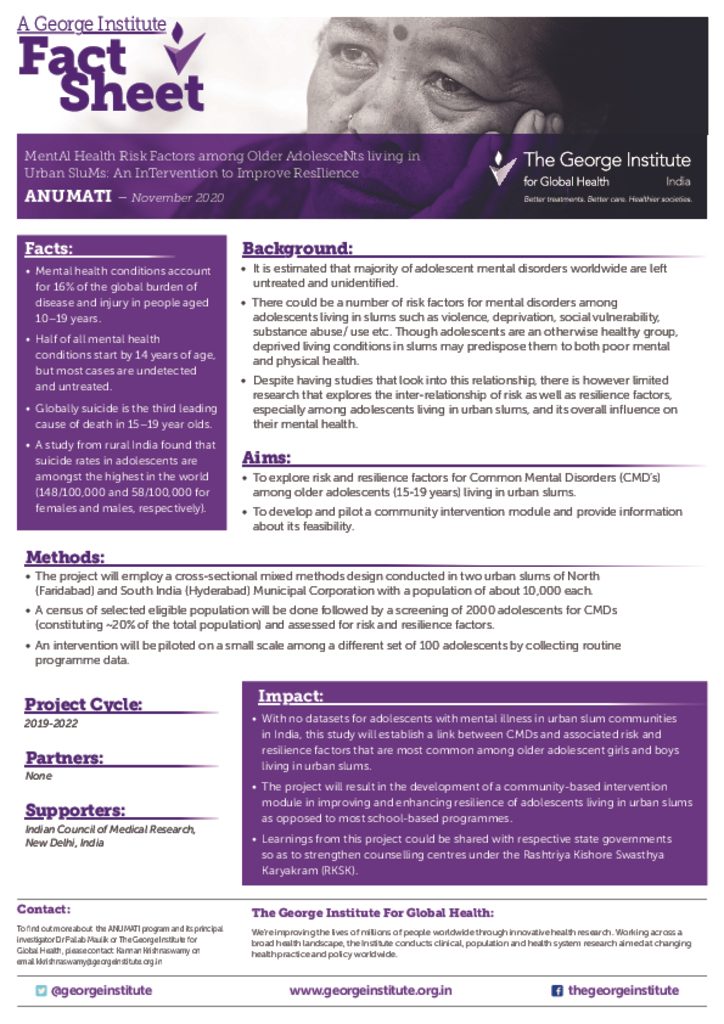