Chronic kidney disease (CKD) has become a growing public health problem worldwide with a serious socio-economic impact. CKD results in mortality due to progression to end-stage renal disease and a disproportionate increase in the risk of cardiovascular disease (CVD) and associated deaths.

Recent advances suggest the possibility of using biologically relevant biomarkers to develop prediction algorithms for outcomes in patients with CKD. However, there are no large longitudinal studies comparing the differences in racially, geographically and genetically different populations.

Project aims to establish a large cohort of Indian patients with moderate kidney failure (40-60% reduction in kidney function) by enrolling 5000 patients cared for at 8 centers nationwide, who will be prospectively followed for a minimum of five years and to develop prediction algorithms. It will be the first study to evaluate the prediction power of biologically important biomarkers on clinically relevant end points in the Indian population.

​The study aims to recruit a large cohort (5000 patients) of CKD patients in India who will be followed prospectively to compare the natural course of CKD in India with that in other countries and to establish valid associations between biomarkers and disease progression. Such knowledge will be fundamental to enhancing our understanding of the causes of CKD-associated illness as well as the design and implementation of effective therapies. Aprt from opportunities for gene expression profiling and genotyping, the study will also include additional approaches using modern technologies such as proteomics and metabolomics to identify new biochemical and genetic genetic biomarkers of CKD progression and CVD complications.

The study is collecting biological samples with an exploration of genetic markers of kidney disease severity, progression, and elevated risk for CVD. At the end of September 2017, 2275 subjects have been recruited and are currently being followed up. The study is now part of the International Network of Chronic Kidney Disease Cohort Studies (iNET-CKD). 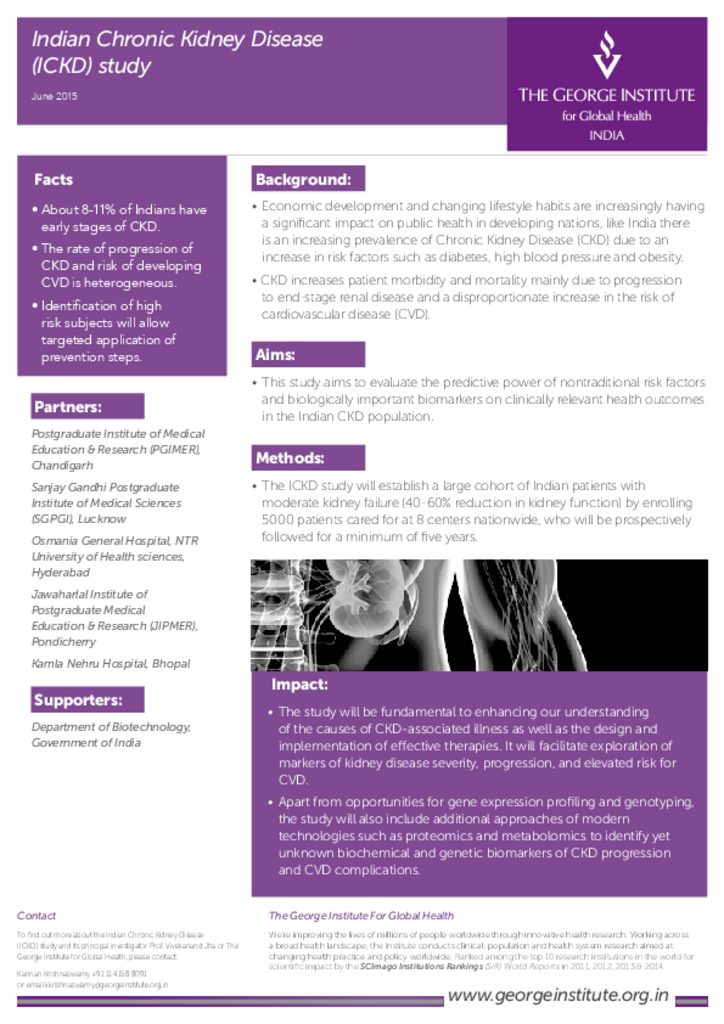