The George Institute for Global Health China Salt Substitute and Stroke Study (SSaSS) has found replacing salt with a reduced-sodium added-potassium ‘salt substitute’ significantly lowers the risk of stroke, heart disease and death. The study – undertaken in China over five years – is one  of the largest dietary interventions ever conducted, with over 20,000 participants from 600 rural villages in five provinces. All the participants had a history of stroke or were aged over 60 years old with high blood pressure. The findings provide clear evidence that salt substitution is one of the most practical ways of achieving a real impact and a positive change to our health.The findings of SSaSS presents a highly feasible and low-cost opportunity for:

If salt substitutes can become available all around the  world – it will prevent millions of early deaths.

Globally every year, over 13 million people suffer a stroke, causing around 5.5 million deaths. It is the second leading cause of disability and death among adults globally. High blood pressure is one of most known causes of stroke. Excess salt consumption of more than five grams per day is responsible for three million deaths globally each year from stroke and heart disease – with four out of five deaths in low- and middle-income countries.

The salt substitution study commenced in 2014 with the recruitment of 20,995 participants from 600 rural villages in five Chinese provinces. 72.6% of participants had a history of stroke and 88.4% were aged over 60 years old with high blood pressure. The study split the participants into two groups – the first continuing to consume normal salt (sodium chloride). The second group were provided enough salt substitute (25% potassium chloride) to cover all household cooking and food preservation requirements – about 20g per person per day – free-of-charge. After almost five years, in comparing the two groups:

In addition, the salt substitute participant group had no increased risk of serious adverse events. Salt substitutes were relatively cheap and effective, costing approx. US$1.62 per kilo versus US$1.08 per kilo for regular salt in China. The Salt Substitute & Stroke Study was funded by the National Health and Medical Research Council in Australia. 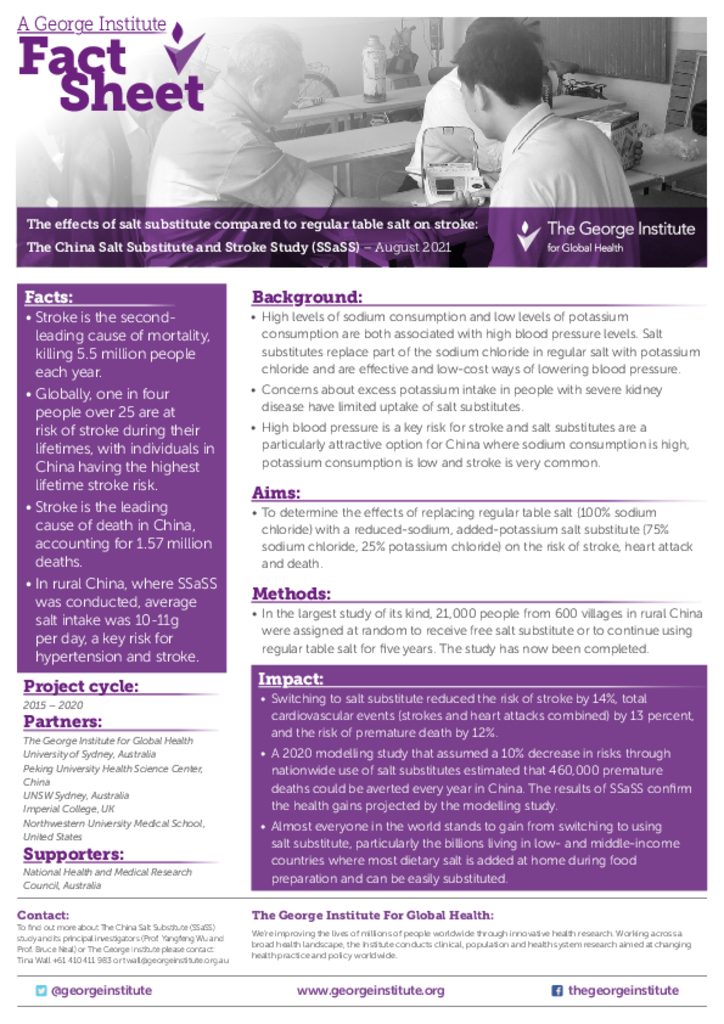