Stroke is one of the top three causes of disability. Treatments that improve recovery after stroke are lacking. A recent small study suggested that the antidepressant drug, fluoxetine, may improve the recovery of strength in stroke patients with limb weakness.

The Assessment of Fluoxetine in Stroke recovery (AFFINITY) Trial aims to find out whether fluoxetine, given in the first two weeks after stroke to 1600 participants, and continued for six months, is safe and improves recovery at six months compared to a placebo.

Approximately 60,000 people have a stroke each year in Australia, of whom about 48,000 survive the first year. While close to 90% of stroke survivors live at home, at least half will have long-term residual disability. This places a substantial burden on health and social services, informal carers, and the stroke survivors.

Although more can be done to implement effective acute treatments, such as thrombolysis and organised multidisciplinary care in stroke units, there is a dearth of effective, safe, affordable and accessible interventions to facilitate recovery after stroke and increase functional independence after stroke.

One promising intervention that needs to be tested is a widely used antidepressant medication, fluoxetine, a serotonin reuptake inhibitor (SSRI).

This is a randomised, parallel group, double-blind, placebo-controlled trial. Participants are being recruited from stroke clinics, rehabilitation facilities and clinics from across Australia, New Zealand and Vietnam. The participants will be taking fluoxetine or placebo for six months and will be followed up for a total of 12 months. As of September 2017, 390 people have been recruited into the study. 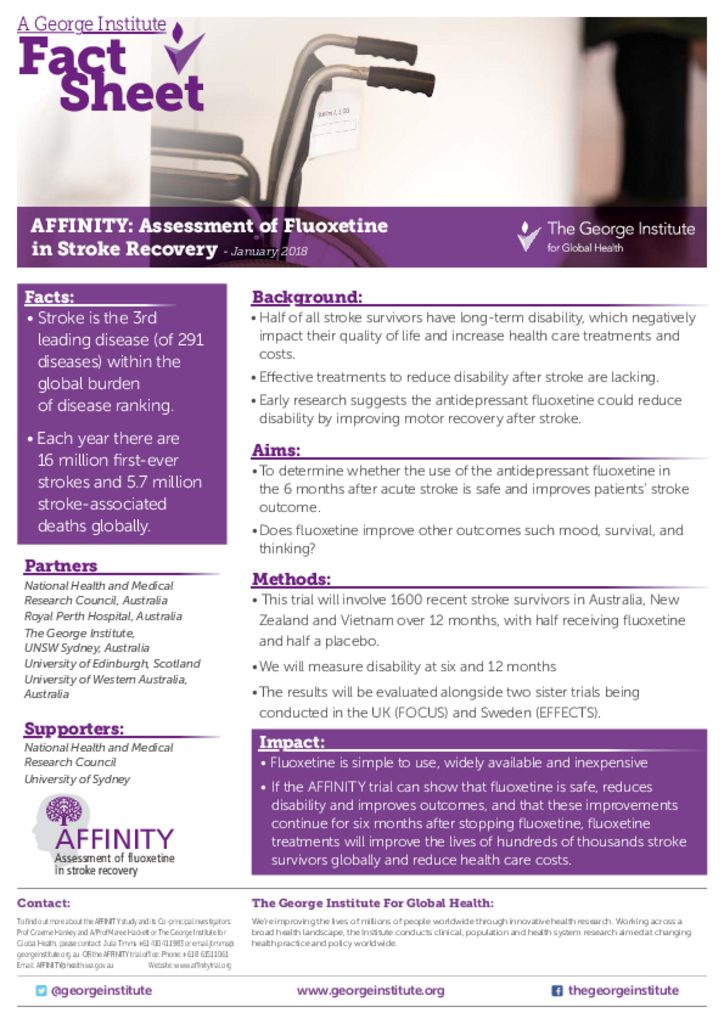