Globally, one in four adults will have a stroke in their lifetime. New research published in the Journal of Neurology, Neurosurgery & Psychiatry confirms the life-saving value of a simple brain scan in identifying the early signs of stroke and the best treatment, and helping clinicians predict the likely severity of the outcome, including risk of death and disability.

Lead author of the study, Dr Candice Delcourt of The George Institute for Global Health explains in this Q & A, the relevance of this new research in the treatment and care for one of the world’s biggest killers, stroke.

How is a brain scan used to treat stroke?

When a person is admitted to emergency with signs of a stroke, a brain scan (also known as a CT scan) is done to quickly make a diagnosis and identify the kind of stroke. There are two kinds of stroke and the treatment for each is vastly different, which makes timing for the scan critical.

The most common stroke globally is due to a blocked blood vessel (ischaemic stroke). Treatment involves giving the clot-busting medication ‘rt-PA’. This process, also called thrombolysis, should happen as quickly as possible, and within 4.5 hours of the onset of symptoms. The risk with this medication is bleeding in the brain and it should not be given to a patient with a haemorrhagic stroke, the second kind of stroke, which is bleeding in the brain from a broken blood vessel. A brain scan rules out a haemorrhagic stroke before thrombolysis is given.

What was the aim of your research?

Our research team aimed to expand on a previous brain scan imaging study from the Third International Stroke Trial (IST-3), published in the Lancet, which showed on a brain scan the association between early signs of ischaemic stroke and old signs of brain frailty, and outcomes after thrombolysis.

We used data from our landmark clinical trial ENCHANTED, which looked specifically at the clot-busting treatment for acute ischaemic stroke and which generated a fantastic brain imaging bank of some 3,000 scans. In collaboration with the University of Edinburgh (Professor Joanna Wardlaw and Dr Grant Mair), we examined these brain scans to look for an association between changes on the brain scan of ischaemic stroke patients and the outcome after thrombolysis in a different population group to the IST-3 study – mostly Asian, younger, and with less severe ischaemic strokes.

What was the outcome?

By looking at a different population to IST-3, we were able to confirm and broaden IST-3 evidence on the critical importance of brain images of patients scanned within a few hours of the onset of an ischaemic stroke. Together with the findings of IST-3, we have robust evidence to help guide clinicians when considering prognosis of patients treated with thrombolysis.

Importantly, we showed that it’s possible to predict the likely severity of outcomes if the brain scan shows pre-existing, chronic signs of brain ‘frailty’ (e.g. more than expected from ageing or previous strokes), in addition to early signs of acute ischaemic stroke. We also showed that the presence of acute signs of brain cell death on the brain scan and a visible large vessel blockage, are associated with a worse outcome and increased risk of bleeding after rt-PA.

Sadly, the outcome for ischaemic stroke patients, with a scan showing existing brain frailty and acute brain changes, is likely to be worse, with higher chance of death and disability. But, they still benefit from clot-busting treatment and having this kind of information adds to what we already know about prognosis in the early stages of stroke. Our research confirms the value of recognising acute stroke signs and chronic ‘brain frailty’ signs at the early stages of stroke diagnosis and treatment; and helps us have more informed conversations about treatment and care with patients and families, particularly about the risks and benefits of thrombolysis treatment and likely outcomes. 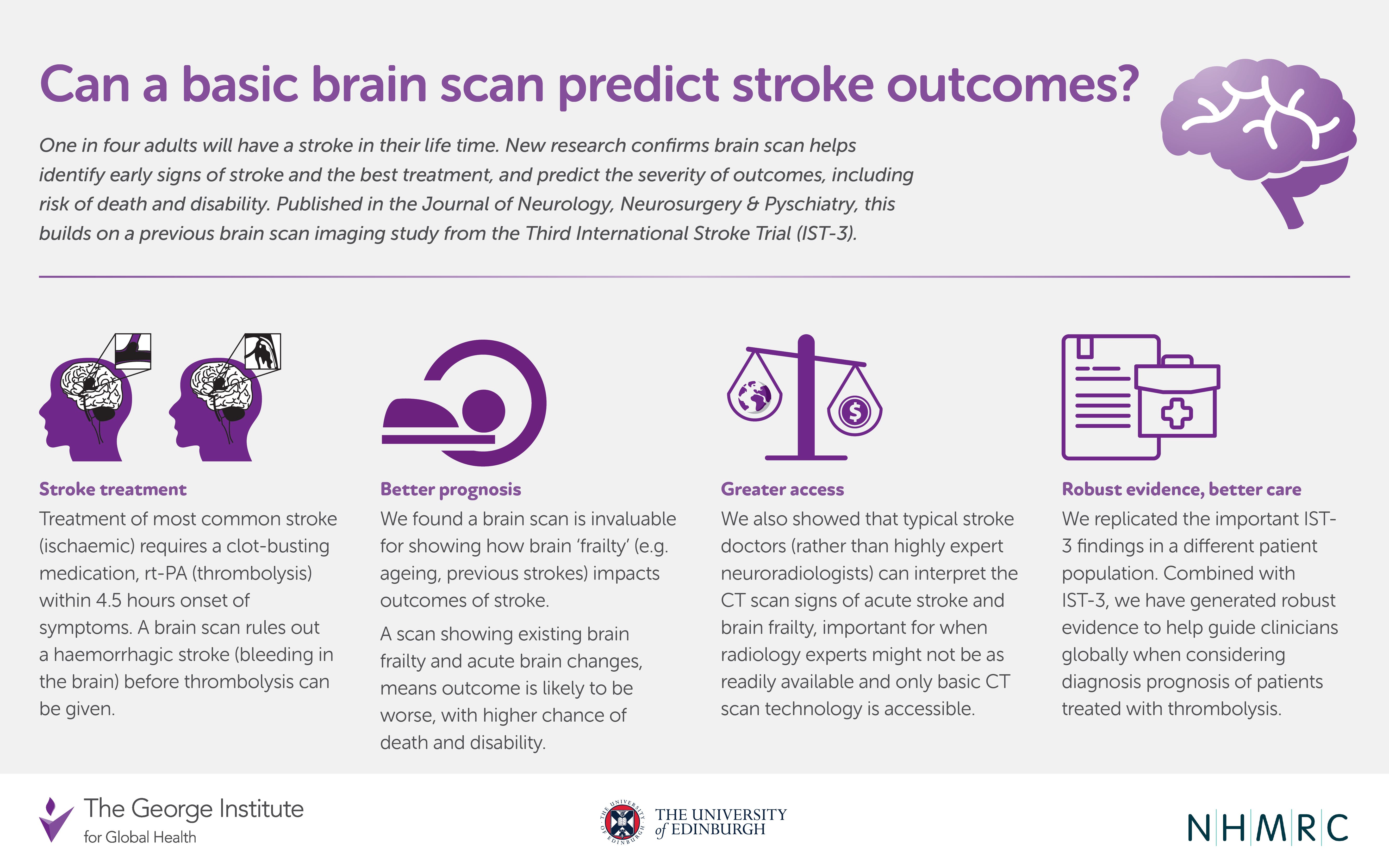 What are the practical implications?

Until now, a brain scan was recognised as critical for examining the acute signs of stroke – now we know it’s also invaluable for showing how pre-existing frailty impacts outcomes of stroke and can help shape future research in the prevention, treatment of stroke and its associated risk factors.

In the IST-3 study, highly qualified specialists in neuroradiology analysed basic brain CT scans. In contrast, our research used ‘less’ expert clinicians and showed that typical stroke doctors (rather than highly expert neuroradiologists) were as good at interpreting the important CT scan signs of acute stroke and brain frailty and predicting outcomes. This is particularly useful in out-of-hour emergency departments and low-resource settings, where radiology experts might not be as readily available and only basic CT scan technology is accessible.

COVID-19 patients are at higher risk of ischaemic stroke, and often with a worse outcome from this form of stroke. Early CT scan changes and signs of brain frailty will also play a role in predicting the outcome of COVID-19 patients with a stroke. The findings from our study are important to informing the growing evidence around our understanding of COVID-19, its complications such as stroke and long-term impacts.

What insights does this research provide into how researchers can leverage existing robust clinical data, such you did with ENCHANTED?

High quality clinical trials are costly and resource intensive, especially when these involve thousands of patients across multiple countries. By using existing quality data, such as the brain scans in our ENCHANTED trial, we could generate more robust evidence to improve understanding of one of the biggest burdens of disease globally, and more broadly, promote clinical trial efficiency and avoid ‘waste’ in the clinical trial process. Replication of science is as important as the original work as this provides certainty that the results are robust and widely applicable.

By using existing quality data, such as the brain scans in our Enchanted trial, we could generate more robust evidence to improve understanding of one of the biggest burdens of disease globally, and more broadly, promote clinical trial efficiency and avoid ‘waste’ in the clinical trial process.

Bitesize: What high Blood Pressure means for your brain