Circulation: Sex differences in primary and secondary prevention of cardiovascular disease in China

A new study, published in the “Go Red for Women” issue of the prestigious cardiovascular journal, Circulation[i], found there are significant gender differences in the use of primary and secondary prevention strategies for cardiovascular diseases (CVD) in China.

Led by researchers at Beijing Anzhen Hospital, Heart Health Research Center, and the George Institute for Global Health in China, they analysed data from a national epidemiological study conducted between 2014 and 2016, which targeted 47,841 participants in 14 cities and 25 villages in China.  There were 9,532 people who had a high estimated 10-year CVD risk,[ii] of whom 70.5% were women, and 5454 with established CVD (57.2% women).  The study quantified the degree of gender differences in primary and secondary prevention of CVD and determine greater differences according to age, education, residence, affluence, and disadvantage.

Key findings of this study include the following:

In China, not only is the use of guideline-recommended CVD preventive medications and levels of risk factor control found to be sub-optimal, but there are clear differences between men and women, and this varies by location and approaches according to level of CVD risk.  These data add significant gaps in our understanding of the management of CVD which hopefully will inform policy and practice.

In this study, the socio-economic inequality between men and women was found to further widen the gaps in the control of risk factors for CVD.  Gender inequality in individual income is a major contributor to women's poor health.  China's primary health care system appears ineffective at controlling CVD risk factors while hospitals focus on treating acute diseases and neglect long-term disease management and prevention for patients.  In addition, for the majority of the rural population who participate in the New Rural Cooperative Medical Scheme[iii], long-term blood pressure-lowering drugs, statins and antiplatelet drugs are insufficiently covered, contributing further to differences in CVD prevention in rural and urban populations.

Professor Craig Anderson, an author of the paper and Chief Representative of the George Institute for Global Health (China), said that inadequate drug use and risk factor control for CVD prevention were global phenomena, particularly in low-income countries and rural areas. "Our study expands prior data from Western countries to show that women are less likely to receive guideline-recommended therapy. For the significant gender inequalities shown in the study, more in-depth research should be conducted to understand its decisive factors and mitigation methods, which are critical to china's current health policy development. "

Professor Du Xin, Director of the Heart Alliance George Heart Health Research Center (HHRC), and one of the lead authors of the paper, suggested that the government should undertake multiple interventions, including raising patient awareness and self-care abilities, improving GP skills, and strengthening the primary health care network. "Prevention is key for patients with established CVD and those at high risk of future CVD events. There is an urgent need for developing effective CVD prevention strategies, especially for women, so that the health condition of this massive population can be improved. "

[i] Circulation is a scientific journal published by Lippincott Williams & Wilkins for the American Heart Association. Its 2018 impact factor is 23.054, ranking it second amongst journals in the Cardiac and Cardiovascular Systems category.

[iii] China’s New Cooperative Medical Scheme (NCMS) is managed at the county level. The participation number has grown steadily every year, from 80 million in the early stage of the pilot programs to 812 million by the end of June 2012, with over 95% of the targeted population covered.

Our study expands prior data from Western countries to show that women are less likely to receive guideline-recommended therapy. For the significant gender inequalities shown in the study, more in-depth research should be conducted to understand its decisive factors and mitigation methods, which are critical to china's current health policy development. 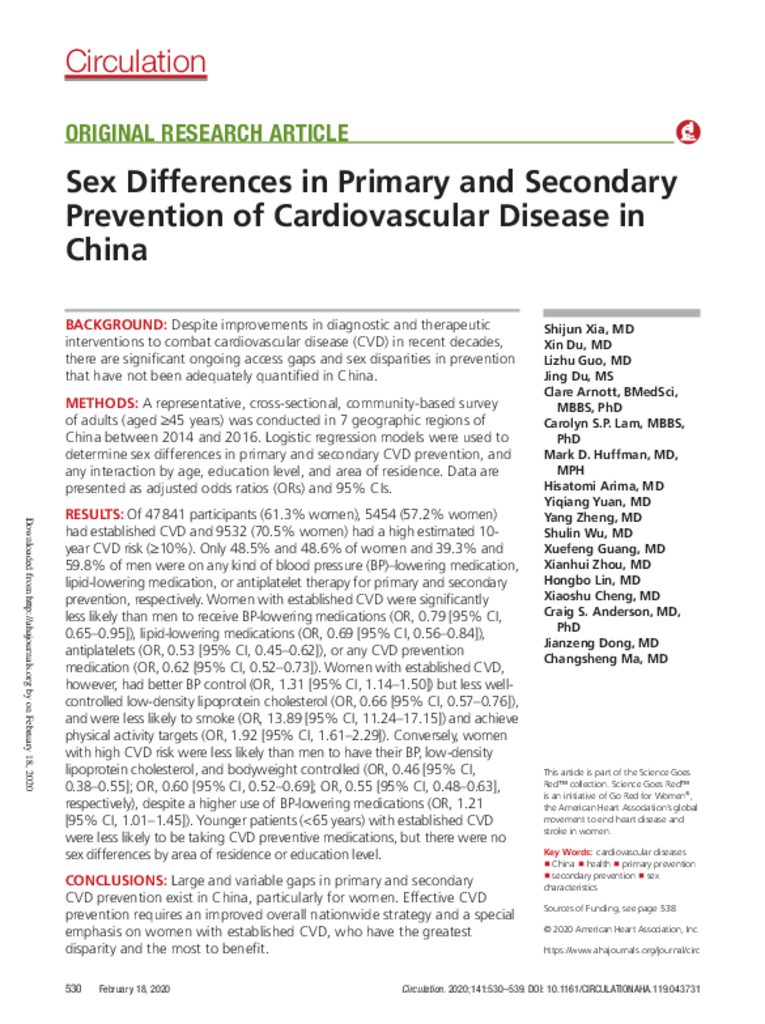