New research on intravenous fluids used in intensive care shows that commonly used saline is as effective at keeping people alive and their organs functioning as more expensive ‘balanced’ solutions.

The results not only provide doctors with greater certainty about the safety and benefits of saline solution, but also have broader implications for treatment availability and costs around the world.

“Just about every patient admitted to the Intensive Care Unit (ICU) will receive intravenous fluids for resuscitation or as part of standard treatment,” said Professor Simon Finfer AO, an ICU physician and senior researcher at The George Institute.

“However, the best choice of fluid has been a longstanding issue of debate as some fluids were approved and licensed for use based on trials in small numbers of patients looking only at short term outcomes.”

Plasma-Lyte 148® is a type of intravenous fluid that more closely matches the body’s normal levels of certain minerals, known as balanced multi-electrolyte solutions, or BMES. Use of BMES has increased since concerns were raised about increased rates of kidney injury and death associated with saline although this had not been proven in clinical trials.

To address this uncertainty and to help doctors choose the best fluid for their patients, George Institute researchers designed and led a large clinical trial - the Plasma-Lyte 148® versUs Saline (PLUS) study - involving over 5,000 patients across 53 sites in Australia and New Zealand.

They recruited adult patients admitted to participating ICUs during the study period who needed intravenous fluid resuscitation for their underlying medical condition. The patients were followed for a period of 90 days after treatment as previous research had shown around one in four would be at risk of dying within this timeframe.

The research team primarily looked at rates of death in patients who were given the BMES or saline while they were in the ICU. At 90 days after the treatment, the same number of patients in the BMES and saline groups had died.

The number of days that the patients required mechanical ventilation, kidney dialysis, their survival time in the ICU and in hospital, as well as major measures of healthcare costs were similar between the groups.

“We found no evidence that using a balanced multi-electrolyte solution in the ICU, compared to saline, reduced risk of death or acute kidney injury in critically ill adults,” said Prof Finfer.

Each year in Australia 160,000 people are admitted to ICU. It is one of the most expensive aspects of healthcare with one day in ICU costing a minimum of $4,000. With high demand for ICU beds, resources and expertise, even a small difference in outcomes may result in important clinical and economic effects at the population level.

In the early 1990s, up to one in seven people were dying in ICUs across Australia and New Zealand, prompting George Institute researchers to start investigating intravenous fluid resuscitation – one of the most commonly used treatments in intensive care settings.

This started a program of fluid resuscitation research conducted in ICUs that no-one previously thought possible which has resulted in major changes to clinical treatment guidelines worldwide, preventing harmful practices and saving many lives.

“PLUS is now the third high-impact randomised controlled trial of fluid therapy we have conducted that have led to changes in the way critically ill patients are treated,” added Prof Finfer.

“In our first trial, we compared the commonly used saline with another fluid, albumin – and in the second trial, saline with Hydroxyethyl Starch or HES solution that was also widely used for fluid resuscitation around the world.”

“We found saline was as good as albumin and better for patients with a traumatic brain injury, and saline had similar outcomes to HES without the associated toxicity.”

“Our researchers have changed the way the medical world thinks about intravenous fluids and have demonstrated that the choice of fluid should be treated with the same care and attention as the prescription of any drug,” added Prof Finfer.

Please refer to a related paper published in NJEM Evidence on this page. 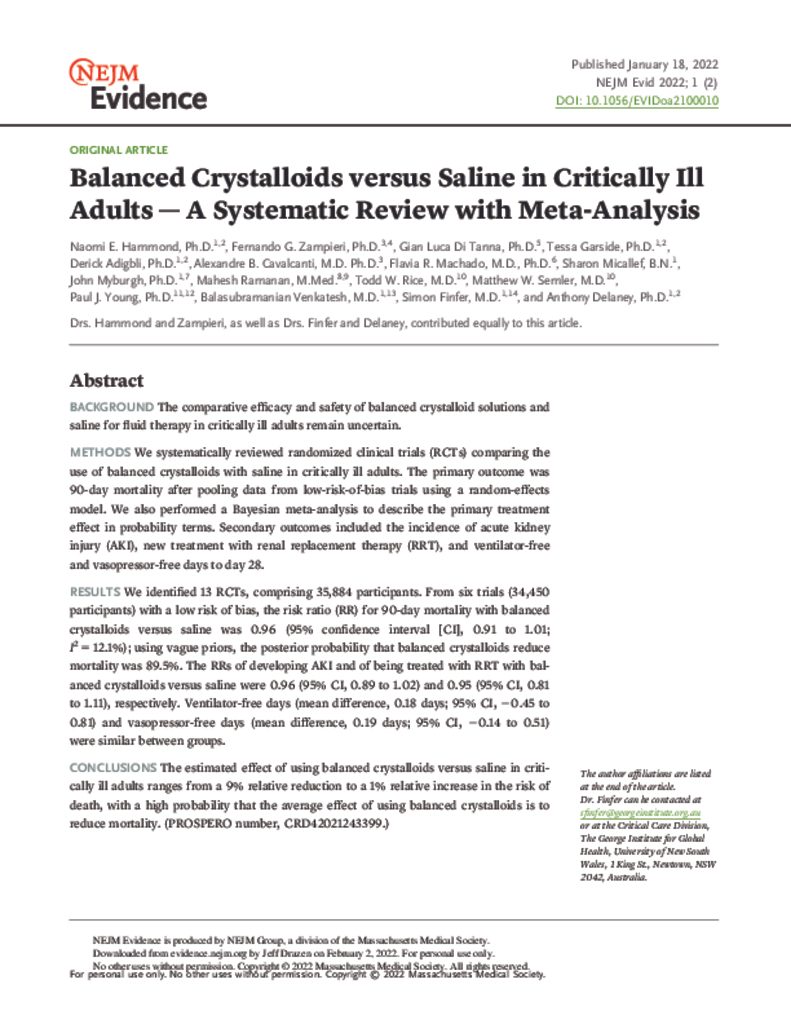