The George Institute, China celebrated as a global partnership

Chronic diseases like heart disease, diabetes, kidney disease and lung disease are among the world’s biggest killers, claiming 38 million lives each year around the world. In China, chronic diseases are becoming the major cause of death, involved in 86.6% of all deaths.

To tackle this severe problem, The George Institute, China (TGI China) was officially established in 2007 with a commitment to researching and identifying practical solutions to the growing burden of chronic disease. The George Institute is a global organization with its headquarters in Australia and offices in China, India and the United Kingdom.

What did TGI China do

In 2017, TGI China embraces its 10th-year anniversary, enjoying a high reputation especially in the area of non-communicable disease (NCD) management and conducts a series of high-impact research projects.

Those projects include but not only limited to :

The AustCham Westpac Australia-China Business Awards (ACBA) was first established in 1993 to acknowledge the diverse range of Australian business interests in China. The awards recognize the richness of projects and partnerships that are at the forefront of a key Australia-China business relationship.

On 18 May, 2017, The George Institute, China won the ACBA award in the category of Business Excellence for Sustainability, Diversity and Social Responsibility, for its global efforts in improving health and combatting chronic disease in China and around the world.

Prof Craig Anderson, Executive Director of The George Institute, China, accepted the award at the ceremony in Beijing.

“It’s a fantastic honor as we were up against some incredible finalists,” he said at the ceremony. “The mission of The George Institute is to improve the health of millions of people worldwide and we are doing just that in China. This is evident in our work in the area of heart disease, stroke, trauma, injury, women’s and child health, diabetes and nutrition. We do this by providing innovative, scalable healthcare solutions and we conduct high-impact research projects.”

Encouraged by the award, staff at The George Institute, China are now even further committed to their goal of improving the lives of millions of people in China, today and tomorrow. 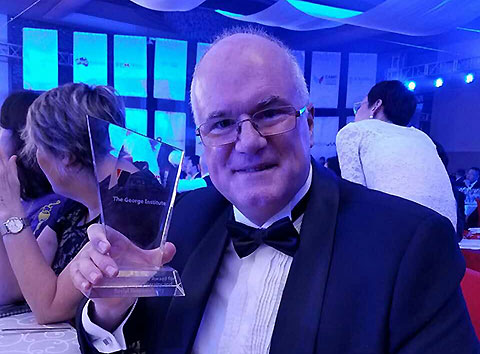